by Lauren Cardon, Department of English

During the Teaching Professor Technology Conference in Atlanta, I was a facilitator for a Strategy Swap session on group work. I met with two different groups of people for thirty minutes each, and we shared our strategies.

Most of our discussion focused on group work in the classroom — that is, breaking students up into small groups to let them practice strategies we’re teaching them. However, in one of the groups, our conversation focused more on group assignments, or team projects. 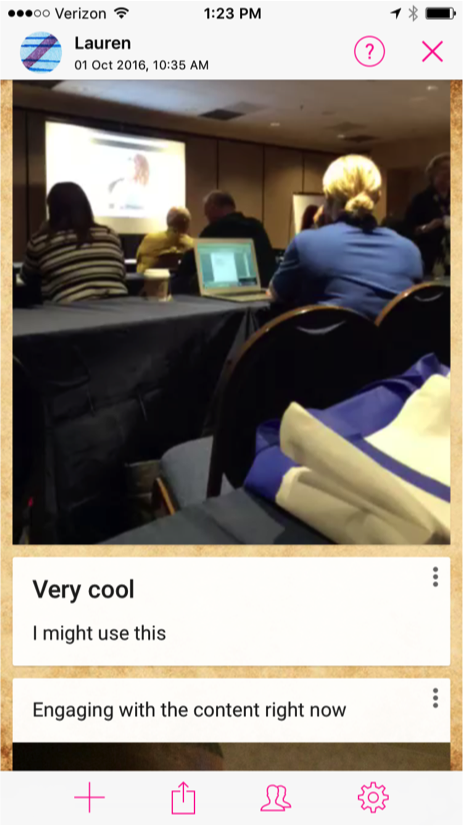 We shared a common problem across our disciplines (design, engineering, nursing, and English): How do you ensure all group members are accountable without encouraging them to “tattle” on one another?

Professors who give group assignments often build in ways for group members to critique each other’s performance, which tends to become a way to let the professor know if some students weren’t pulling their weight. Unfortunately, this scenario does not mirror the professional world, in which people often have to work with teams, and the effort is rarely evenly distributed. Some team members get credit for a successful project, even if they contributed minimally. We agreed that ideally, our projects should reflect real-world scenarios.

I had recently learned of an app called Padlet (a tool that was “trending” during the conference). I thought Padlet might serve the needs of a group project. Rather than encouraging students to tell the professor if someone isn’t putting in enough effort for a team project, we can encourage them to establish agendas and objectives, which they could post on a Padlet forum.

Each group would be responsible for updating what was accomplished the previous week, and what each group member’s objective is for the week that follows. Reporting in this way allows the professor to have some oversight over each group member’s performance and contributions, without encouraging an exclusionary dialogue in which a student has to report behind another student’s back. Using Padlet in this way also allows students to mirror a real-world strategy for team-building and project management. The students have to set agendas, delegate tasks, and ensure they update the forum to show what tasks have been completed. Other technological tools may work as well, but Padlet felt more like the kinds of apps students use for fun (similar to Facebook or Reddit), rather than something like a Blackboard Discussion Forum, which they associate solely with work for classes.