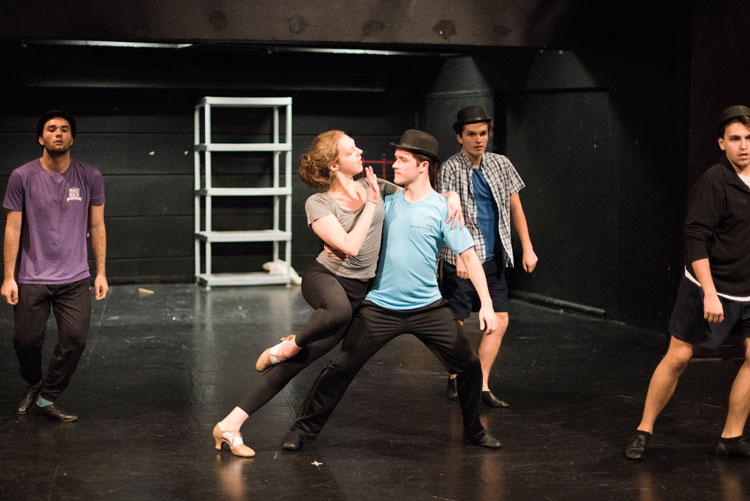 by Alex Ates, Department of Theatre and Dance

As I exasperatingly jogged between terminals to catch the connecting flight from Boston, Massachusetts to Birmingham, Alabama, I couldn’t help but reel with delight by how wildly this semester was functioning. One day, I would be working with undergraduates in Boston, the next, in Tuscaloosa. As flexible educators learn, there is creativity in contradiction and a curious fuel released through academic mania. Jetting back and forth between The University of Alabama where I was directing a production and instructing two courses (in addition to earning my MFA) and Emerson College where I was directing a new musical, I had to adapt and modify my work as an educator to embrace the travel dynamic.

For the Teaching Theatre Performance (TH 245) course I instruct, I devised a unique tech-integrated opportunity. While I was in Boston directing at Emerson, The University of Alabama students consumed essays written by relevant practitioners associated with the Boston area.

Then, students emailed me a specific and detailed question for the author based on their reading. These questions allowed me to assess the students’ interpretations via email and dialogue with them further (Email also allowed me to keep an accessible and timestamped record of their thinking).

I chose this method for the following reasons:

To prepare the students for this endeavor, I created a culture of digital engagement early on in the semester. Via live-stream, they dialogued with Shannon Flaherty and Chris Kaminstein, the co-artistic directors of the award-winning Goat in the Road Productions about creating plays with young students in New Orleans. Also, the students Skyped with New York City poet Donnie Welch about instructing poetry curriculum for students on the Autism spectrum. Thus, a routine for online video engagement was established.

I sent the students’ questions to the authors ahead of time, so they could prepare pithy responses. There would only be one take—no edits.

Several profound insights were shared from this method of instructional engagement. Below, are some jewels from these interviews where three distinguished educators from around the country offer their insights on teaching theatre performance to the next generation of American educators at The University of Alabama.

On keeping calm and maintaining peace of mind

“It’s a skill that we develop over time as educators. I look back on my own teaching and realize how nervous I was when I first started. To paraphrase Maxine Greene, the day you stop being nervous when you go in front of students to teach them is the day you need to quit teaching. It’s nerve-racking to think that something you say or do could have an impact. It happens with time. If you believe in a democratic classroom that’s rooted in community…the classroom is a space where both teacher and student can wield power . . . we never relinquish all the power, but you never take all of the power . . . it doesn’t reside with either party, like teacher or student.”

On preparing yourself to do theatre education work at an institution

“Up front communication is key. It’s not always possible, but it’s key. Asking questions like ‘Is there anything about your policies I should know?’—or—’Are there any taboo subjects that are off limits?’ They may give you some leeway if they believe in the work you’re doing. So, make sure they don’t think that you’re going in there to disrupt the status quo — of course, that may happen in the work that we do — but they don’t need to be on the defensive before you walk in. As soon as you know you may be going into a new program or a new school, try reaching out to get as much information as possible.”

On working with students who don’t want to participate

“I am a firm believer in the Power of the Egress — which I learned in my undergraduate education from Northwestern University from one of my mentors, Rives Collins. I’ve used this device from fourth graders up to grad school students and on every occasion, it’s worked like a charm. The Power of the Egress states that if for any reason a student or participant wants to opt out of an exercise or discussion, they can do so by invoking the Power of the Egress.

Here are some key components: no one has to say why they’re invoking the Power of the Egress, but they may share if they would like you. They can come back into the exercise whenever they’re ready.

Here’s the important part: it’s not a hall pass. They can’t leave the room unless they have experienced some sort of severe trigger. They can’t get on any sort of technology, and they should remain engaged as an observer if possible — this way they can reenter without missing a beat.”

On working with “troubled” and “privileged” students

“Who’s more troubled? Students whom society has stacked the deck against or the sons and daughters of affluent parents who were able to pay their way into USC? Who’s at risk? Is it a group of youth whose schools might not have enough money for sufficient textbooks and technology, or is it our society which is at risk if we don’t educate everyone of the younger generation to compete in the next shift of the global superpowers? Some people may say it’s exhausting working with students who are underrepresented or marginalized. For me, it’s exhausting working with people who are privileged because of the ways in which they feel entitled to have everything come easier to them.”

“The trick is probably to engage less in the theatre skills part of the conversation and more in our instinctive ability to tell stories, to engage in imaginative play, and use that to evoke. We can all act — particularly if you don’t call it acting.”

“Engagement’s everything. So, you can’t start until you find something the students can emotionally attach to.”

On learning from students

“I really do think the person doing the most talking is doing the most learning in most educational situations. So, I often feel that my job as a teacher is, as the British would say, to make yourself redundant so that you’re not needed (or you’re only needed as support).

My brain lives almost exclusively in the essential question mode, and I will never go into a classroom without a question which doesn’t engage me as much as I hope it engages them. And I never bring in [an essential question] which I know the answer to — or — am unprepared to have a new answer to by the time we’re done. That’s how I keep fresh in learning alongside the students.”

“I think we can only model it one classroom, one interaction at a time. If [one teacher] does good work, it will ripple across the school, and it will maybe pick up in other schools.”

On teaching when you, or your students, are drained

Of course, there are days when I come in — especially when there’s something happening in my personal life which is not awesome — and the last thing I want to do is to smile for two hours and talk about how awesome life is. Life sucks sometimes. But singing, history, connecting with other people, clapping, moving, playing music — when I engage myself in all of that, I realize that life is amazing because I’m connecting with these other people and we are bigger than ourselves. While my life may not be ideal, Life itself is awesome.

So even on my worst day, give me a piano, give me a song, and give me people who want to sing together — it’s a wrap. When rehearsal’s over, and I have to go back to my struggle, the energy and positivity I needed to teach that day is found right there in the material I’m teaching.”

On making mistakes as a teacher

“Tell your story. Make sure that your students see you. I want to know the fears, the doubts, and the insecurities of the person that’s teaching me because then I’ll follow them.”

Alex Ates is a graduate teaching assistant and MFA candidate studying Directing in the Department of Theatre and Dance.

*Dr. Christina Marín is the Program Director of Theatre and Film at Phoenix College. Her work as a human rights artist and pedagogue has manifested in a variety of educational settings from elementary schools to graduate programs. Students read Marín’s essay “What You Don’t Know CAN Hurt You” published in Peter Duffy’s A Reflective Practitioner’s Guide to (mis)Adventures in Drama Education—or—What Was I Thinking?

*Lin Wright Award winner Dr. Bob Colby is the newly-minted Chair of the Performing Arts at Emerson College—where he has instructed Theatre Education for decades. Students read Colby’s essay “Kindling Fires and Facing Giants: Learning About Drama From Children with Special Needs” published in Peter Duffy’s A Reflective Practitioner’s Guide to (mis)Adventures in Drama Education—or—What Was I Thinking?

*David Coleman is a prolific music director in Boston’s professional and educational theatre scene. He is the iconic orchestrator of the open-and-affirming Gospel Choir course at Tufts University—an institution not affiliated with a faith tradition. Students watched a BBC report on Coleman and were instructed to devise questions based on what they observed.