Although not specifically designed with the classroom in mind, Mill Marginalia Online offers instructors in philosophy, history, law, Classics, and English and European literature and culture the opportunity to incorporate Digital Humanities research results and methods into their courses. Each of these major subject areas is amply represented in nineteenth-century philosopher and liberal theorist John Stuart Mill’s personal library.

Mill Marginalia Online seeks to digitize all of the handwritten marks and annotations found in Mill’s 1700 or so books, and the chances are excellent that at least one of these books appears on a syllabus near you. Investigating this possibility is as easy as browsing through the site’s list of authors or volumes, and then leading students to the nonverbal marks and verbal annotations left behind by Mill in his own copy to, quite literally, compare notes.

For instance, one might follow the lead of my co-PI, Dr. Emma Wilson, now an Assistant Professor of English at SMU, and direct students to read American icon Ralph Waldo Emerson’s essay “On Love.” She began in a traditional way, with a couple of students leading our discussion of the essay itself and asking a series of questions to understand Emerson’s underlying ideas and their reactions to him.

As it turns out, this was an essay to which Mill took particular exception, and so, having come to their own conclusions about Emerson’s aims within the essay, the class turned to Mill Marginalia Online for a rather different perspective.

Students were tasked with going to Mill’s annotated pages from the essay and reading his words as the primary text. Since Mill’s words include such edifying comments as “pooh” and “fudge,” the act of re-reading became highly productive that foregrounded competing schools of nineteenth-century thought — in Wilson’s words, “Utilitarianism took on romantic idealism in a vital contest” — and that freed students from the habitual deference towards canonical chestnuts that can sometimes limit discussion. 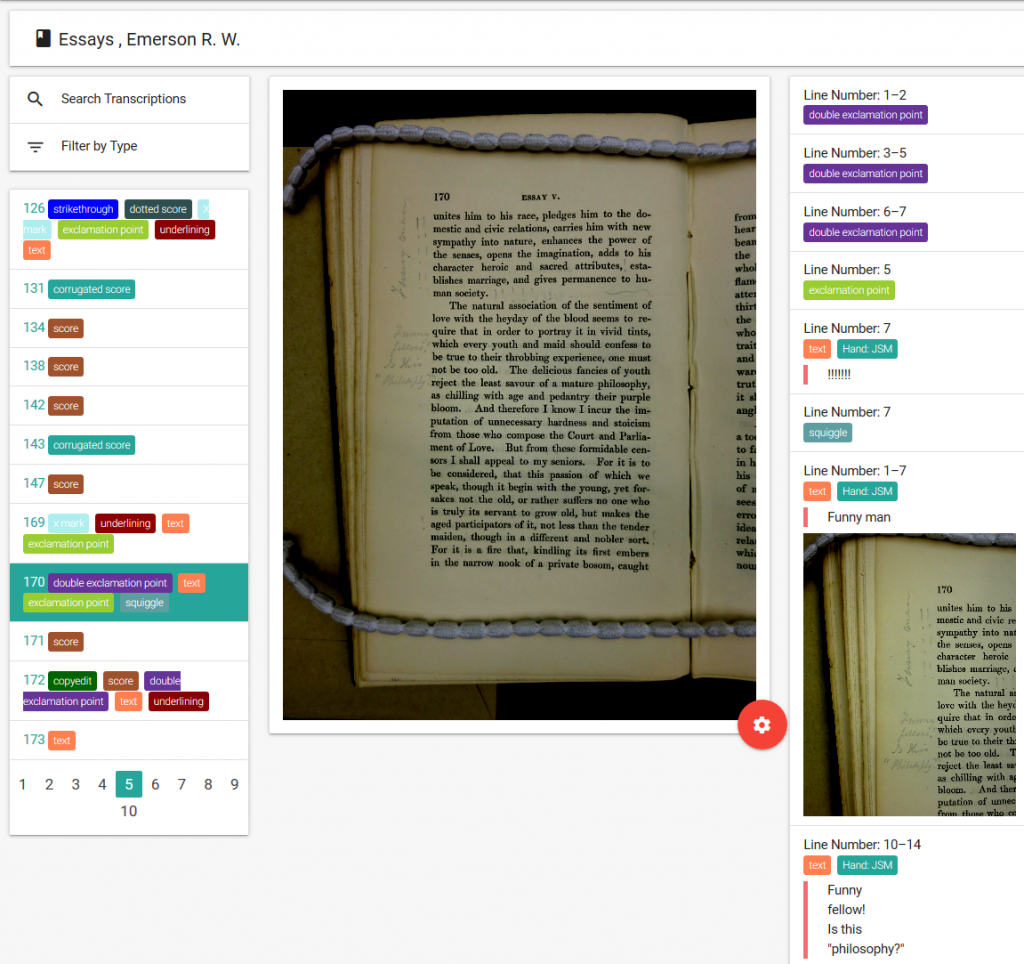 Because Wilson’s was also a class in Digital Humanities methodology, students followed up their re-reading by digging a little deeper into how information about Emerson’s Essays — the volume’s metadata — was recorded for presentation on Mill Marginalia Online.

Working in pairs, students identified key moments of contact between the two writers, and then, as a class, began to search for Mill’s use of the same terms, both verbal and non-verbal, across the rest of his digitized library.

Having seen that they could indeed leverage metadata to discover that there were trends and patterns of marginalia usage across Mill’s library, Wilson’s students used the site to explore not only what metadata can do, but how to create it. These students had archival projects of their own to complete before the end of the semester, and the site provided them with a model for how to record a wide range of information about the objects of their research.

The exercise was for students to choose an example of marginalia which they found particularly striking, amusing, or otherwise important, and to retroactively create the metadata which would make it findable.

To do this, they had access to the schema and its definitions, as well as to the different types of marginalia documented alongside examples of the same. They had to learn how to create both standard metadata entries (e.g. author, title, date) in a consistent and rigorous way, and then how to implement the project-specific schema to capture project-specific data such as type of marginalia, and its transcription (when appropriate).

Although time-consuming to do, this hands-on assignment led Wilson’s students to some key insights. Again, in her words, “working with digitized archival materials including manuscript annotations was helpful in setting some expectations (this is going to be hard to read and we have to persevere), in instilling the importance of accuracy (see how this makes the project work), and also in generating a sense of excitement as students headed towards their own first archival experiences.”

Although not all of the titles digitized for Mill Marginalia Online contain the same level of snarky disagreement as Emerson’s Essays, many offer instructors a similar opportunity to introduce students to different styles of and perspectives on reading. And all could be deployed for a lesson in metadata design and archival research akin to that featured in Wilson’s class.