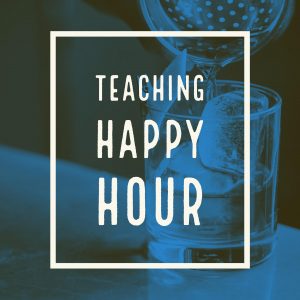 The Teaching Happy Hour is an opportunity for A&S faculty and instructors to gather in an informal setting and share their ideas and strategies for the classroom.

This year, the theme was “My Worst Hour Happy Hour,” and to enter the happy hour room, faculty had to describe their worst hour teaching and what they did to salvage the class period and/or make sure it never happened again. Here are some highlights.

“One semester I had to stage a four-way reenactment debate over the confusing events of the Fourth Crusade of 1204. It was awesome. The next time I tried it, four years later, it was a total disaster. Disorganized, unfocused, undisciplined. The reason, in hindsight, it was obvious: I had coasted on the memory of the success from the first time and had not put in a fraction of the preparatory work. I thought the magic would simply re-create itself. It did not… And we all paid the price for 75 minutes.”

From Terrible Connection to Community Building in the Classroom

“My second year teaching in grad school, I had a group that would not do their homework, did not get along with each other, and never [almost never] participated in class. The atmosphere was tense. I tried different approaches to engage with them and when none of them worked, I eventually decided to address the situation by having a conversation with my group in class one day. I prepared what I wanted to say, and the questions I wanted to ask them to start the dialogue.  I was nervous but determined. It did not go well… The students stared blankly at me. Some giggled. A few others actually shared some criticism. Most glared at me and left the room angrily after the hour was over.

After this class, I finally went to speak with my supervisor (which, I soon realized, I should have done much sooner). We talked about the different issues I had experienced and then established a strategy. After discussing the need for more regular class observations, and meetings, she invited me to present at the first Graduate Student Workshop Series for my department, and to consider doing research on social contracts and community building for it. This part of our strategy was the game changer for me and has influenced my approach to every group I have taught since.

For every course now, I create assignments and activities that foster a sense of community in my groups. For example, I have asked students to contribute to a common review document they eventually used to study for the final exam and to work with different classmates during the semester in order to get to know everyone in the group. I have also found that by establishing an ongoing two-way dialogue from the very first day of the semester, which invites them to share the positive aspects of the course and those in need of improvement, the rest of the semester tends to proceed in a much more pleasant atmosphere, and our exchanges are much more productive too.”

“My worst hour was to show up to class telling students in a grad course, “let’s talk about chapter 6.” I quickly realized that I had assigned a different chapter of the book than I had prepared to lecture on. The solution? Putting students in groups of two. They had to come up with a discussion question on different parts of the chapter. They wrote the questions on a Google doc that I quickly set up. I had each group lead the discussion using their questions.”