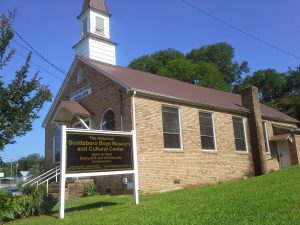 Learning the lessons of history is crucial to promoting diversity and achieving justice. University of Alabama students’ involvement in historical research on racial discrimination led to them “making history” in two ways — by writing about past events and by advancing the work of the Scottsboro Boys Museum and Cultural Center to win exoneration of the Scottsboro defendants, nine young men wrongly accused of rape in 1931.

The movement to defend the Scottsboro Boys was the Black Lives Matter movement of its day. Coming at a turning point in American justice, the Scottsboro trials led to two influential Supreme Court decisions, affirming rights that we regard as fundamental today. Powell v. Alabama, 287 U.S. 45 (1932) extended the right to competent counsel and Norris v. Alabama, 294 U.S. 587 (1935) challenged the exclusion of African Americans from jury pools, upholding an equal right to a trial by one’s peers.

More than eighty years after the arrests in the Scottsboro cases, UA students and faculty conducted research that helped Scottsboro Museum Director Shelia Washington and others win the exoneration by the Alabama Legislature of all nine defendants and pardons for three Scottsboro defendants with outstanding wrongful convictions in 2013.

A teaching resource on the Scottsboro cases created by University of Alabama students, professors, and library staff provides a searchable database of letters sent to Alabama Governor Benjamin Miller during the 1930s. The online exhibit, “To See Justice Done: Letters from the Scottsboro Boys Trials” provides access to a sampling of the more than fifteen boxes of archival materials at the Alabama Department of Archives and History (ADAH) in Montgomery. 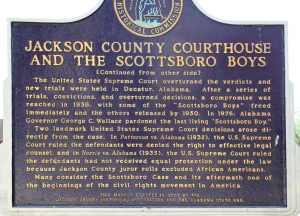 Most of the letters in the exhibit were written in defense of the nine young men who had been accused — falsely — of raping two white women while hitching a ride on a westbound train out of Chattanooga. The Scottsboro Boys became a significant international cause in the 1930s. The letters urging their release came from all over the world, from South Africa, from Cuba, from France.

Putting together this primary source database involved coordinating with the Museum and the ADAH. The Alabama Digital Humanities Center lent technical expertise. UA Department of American Studies graduate student Margaret Sasser spent a summer at the archives identifying potential materials for the project. The letters, postcards, petitions, and posters can be accessed at the website. The website offers a sampling of the much larger collection at the ADAH in Montgomery. Students from Dr. William Bomar’s Museum Studies course transcribed the letters, so each letter can be easily read and is fully searchable. UA faculty translated several of the letters. The letters have been organized into categories — individual, organization, and international — for ease of access.

Recently added to the “To See Justice Done” site is the successful petition drafted and compiled by New College Assistant Director John Miller. The petition to the Alabama Pardons and Parole Board (which was praised as exemplary by the Board Chair) led to the granting of full and unconditional posthumous pardons to Haywood Patterson, Charles Weems, and Andy Wright.