by Erik Peterson, Department of History

Over twenty ago, I was sweltering through another agonizing day of my “Classical Literature Through Film” course that met in a non-air conditioned, glazed brick room that vaguely smelled of old cigars. It was my first film course, yet I realized soon and was reminded often, that this was a terrible class. The films were boring, seemingly pointless. We had “discussions” about each film but, to many of us, the works, often in Greek or Italian with badly translated subtitles, were frustratingly obscure and difficult to unpack. And the tracking on the VCR seemed to go haywire at the moments when the dialogue was the thickest. It may have been our own faults, uncultured students that we were, but the professor never tried to establish a connection with us, and never bothered to rewind, so we never gained clarity on the point of the films or the course. Had there been student evaluations, I would have used them to complain. But the instructor never made any use of such instruments.

A decade later, I was in graduate school and course evaluations were everywhere. I recognized their streamlined — not to say simplistic — question structure and 1-to-5 scoring metric from my stint in the corporate world between college and graduate school. They were the same forms customers used to rate our service and we filled out to evaluate our coworkers in the next cubical. I dutifully filled in the Scantron bubbles of these teaching evaluations with my No.2 pencil. But they seemed to have no impact. So, for one course — a course taught by a highly touted professor who seemed as disengaged from the material as we were — I skipped the bubbles and wrote an anonymous letter instead. Peers a few years ahead of me in the doctoral program believed it would do little. He was at the top of his field, and he “always taught that way.” Surprisingly, the next time the professor taught that course, I learned he had completely altered his teaching style. I immediately became a cheerleader of course evaluations. 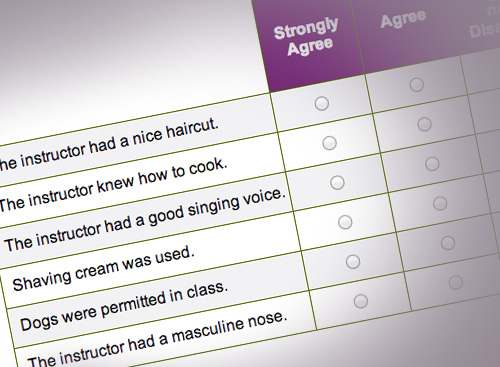 In the decade or so that I’ve spent in the front of the classroom, I’ve definitely soured on the standard quantitative evaluations on offer at all six of the institutions at which I’ve worked. I’ve read popular articles and detailed sociological examinations about them. And I’ve talked with many professors and students. The answers align: rather than tools to improve teaching or student outcomes, we’ve all witnessed these sorts of student evaluations morph into cudgels of the bureaucratic hegemony.

I continued to push qualitative evaluations in my courses. Over the years, I’ve realized even those have serious limitations, however. Case in point: three years ago I gave out my own discursive course evaluations asking students what features they would change about the course if they were going to take it again or before they would recommend it to a friend. Wouldn’t you know it, of the small numbers of students who said they would change anything at all, they were evenly divided between students who would dump one particular topic and associative activities and readings and others who would never take the course if I chose to dump those same topics, readings, and activities. So what lesson was I to draw? Listen to group A and I would be removing from the course the very thing that group B found most valuable about the course. And this isn’t even the most troubling aspect of evaluations.

My informal survey of faculty at the University of Alabama and other institutions across the country is that, while we aspire to reflect on evaluations to change our courses, in actuality we use them to bolster our confidence about our teaching and our courses — maybe even ourselves. When students fail to say nice things, when they don’t wax effusive about how much they enjoyed our course, we chalk it up to their desire for a course that requires no work and an easy grade or their relative ignorance of our area of specialization. They just couldn’t appreciate our talent, our vast knowledge. Secretly though, poor SOIs cause us to wring our hands. Perhaps our peers or administrators wielding actual power have also seen through our façade of pedagogical competence.

The exception to this is when a student takes the step to write something longer and more thoughtful outside of the constraining SOI form. Not only do we appreciate the gesture, we actually change. In my experience, however, these sorts of discursive evaluations are vanishingly rare, even when we solicit them from students. This seems paradoxical. After all, students are eager to share their opinions about what they like and dislike about you (even your appearance) and your course. Many exercise this snap judgment of their peers and their surroundings minute-by-minute on Instagram, YikYak, and Snapchat anyway. Ratemyprofessors.com and Twitter are replete with 120 characters of judgment about course difficulty and “hotness” of the professor. But their ability to maturely reflect upon how they’ve developed as a result of your course — as opposed to the utilitarian value of clearing the hurdle your course represents in the steeplechase for their degree — requires a kind of self-knowledge that few have acquired by their early 20s. (Again, I’m only talking about my decade in classrooms here, your experience may vary.)

Without a doubt, universities will continue to use quantitative SOIs, if only so department heads and administrators have a metric by which to assess quickly the abnormally disliked instructors. I can’t think of a more effective identification tool for a fly-over assessment of one’s employees. I remain deeply skeptical, however, whether quantitative student evaluations are necessary to instigate the kinds of change in educator behavior that would result in improved student outcomes (whatever that might mean). And even if they are demonstrated to be necessary, they still won’t be sufficient.

Is there a better way? If evaluations are to help students, as opposed to administrators solely, then I think there is. Instead of waiting for the rare letter that will help us know exactly how to change our teaching — a letter which can only benefit future students, and then in an indeterminate way, since future students might want something antithetical to the changes you’ve made to address past student complaints — we should ask students to evaluate themselves. If the ancient philosophers who founded the first institutions of higher learning were on to anything, it was that education is about moving from self-ignorance to self-knowledge in the context of one’s community. Why don’t we offer students an opportunity to reflect upon their own metamorphosis? The evaluations I hand out to students (I think the tactile reminder of paper is necessary here!) include questions such as: “Name one moment in this course where your thinking was challenged. What did you used to think? What do you now think?” and “How will you organize yourself differently in the future to get more out of the next course?” and “Is there anything about this course that might stick with you in five or ten years?” 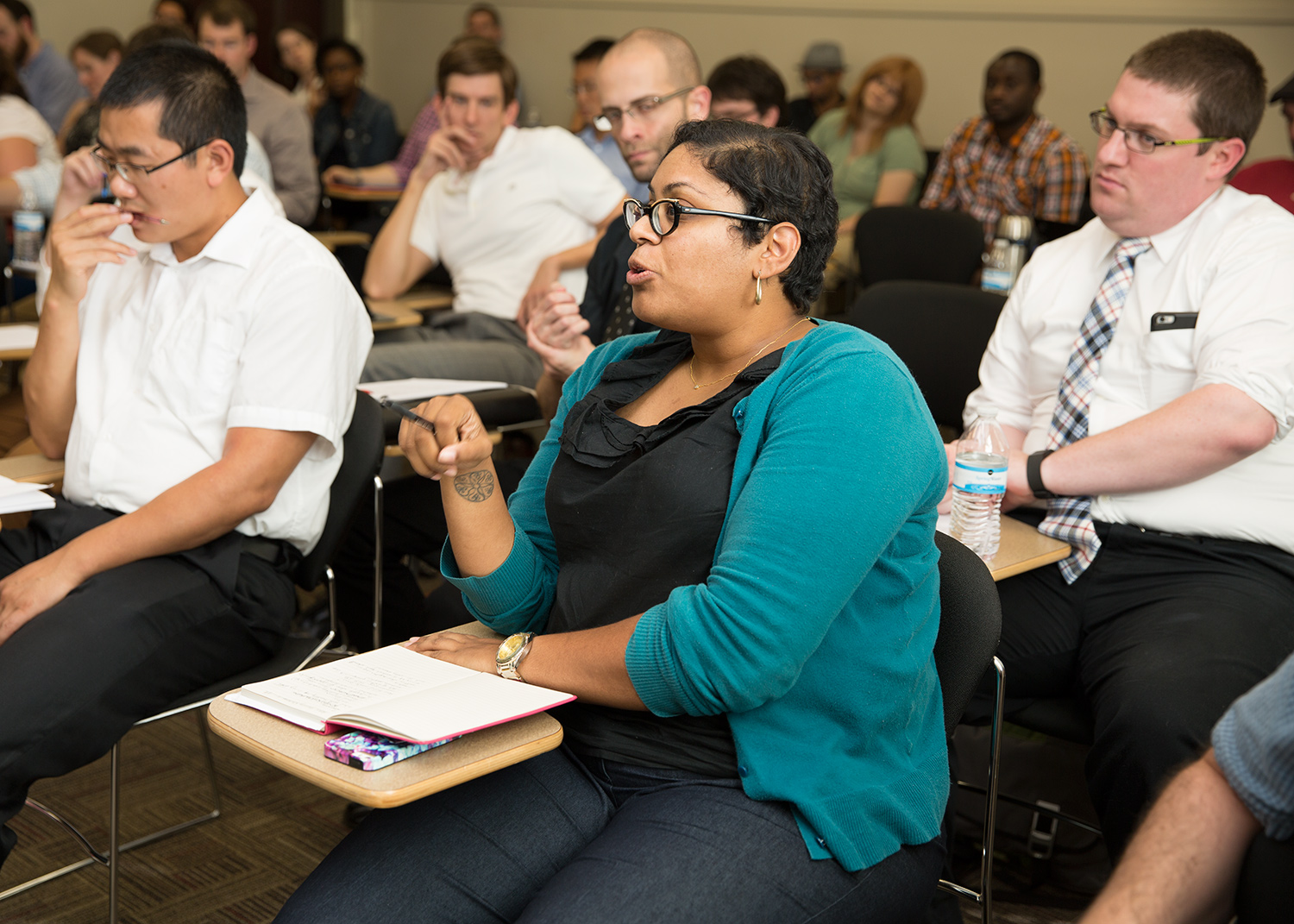 Where I’ve seen the greatest success through student evaluations is when I’ve offered these sorts of self-critical student evaluations halfway through the course. In those evaluations, I often ask, “What do you want out of this course? What will you do differently from here on out in the course to achieve what you want?” Then, at the end of the course, I take their original self-evaluation, I attach it to a new one, and the new one asks: “Did you do what you said you would do to achieve the end that you wanted from this course? What will you do differently next time?” In courses where I do this rigorously — the small seminar courses seem to work best for this — I sometimes see astounding results. It’s not a magic bullet by any means. But sometimes students that only appeared irregularly, students who turned in lackluster assignments, students who couldn’t be bothered to do the readings or discuss them, many of them turn around. It was almost as if they’d never thought to ask themselves, “What should I be doing to learn?”

Don’t get me wrong. It’s not that I lay the onus for education completely upon the students’ shoulders. After all, the letters Ph.D. mean that I have both professional and personal standards to uphold. But the neoliberal concept that education is a product that is delivered to the customer/student and they get to evaluate the product provider/professor based on their satisfaction with the product/course completely misses the centuries-old point of education. The point is that students grow into something better than they would have been otherwise in order that society can grow into something better than it would have been otherwise. When students, parents, and government officials complain that they’re not getting their money’s worth, it’s in some small part because we’ve failed to educate them on what an education means. Educators can provide the venue and offer the fuel needed for growth. But we can’t do the growing for them; nor should we be evaluated as if it were solely our responsibility for their growth. Students are participants in that process. They’re the ones who grow. We should ask them to reflect how they’re doing in that process.