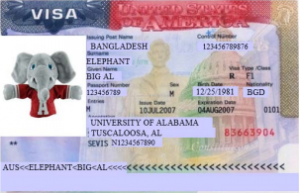 In the wake of the 2016 presidential election, a good many marginally political events have become thoroughly politicized: post-Super Bowl White House visits, the Grammys, and yes, the granting of visas to visitors or would-be immigrants to the United States. But unlike the Super Bowl or the Grammys, many Americans have only the most rudimentary understanding of what a visa is — or how it works.

Sure, we’ve all heard of student visas, green cards, and the like, but only a few of us have dealt directly with them. And as discussions in and out of classrooms increasingly engage the implications of travel restrictions — even in courses outside of politics or foreign affairs — how can teachers keep these discussions productive, accurate, and civil (even if occasionally heated)?

Before you commence your caffeination ritual, roll up your sleeves, and tackle Title Eight, Chapter One, Subchapters A and B of the Code of Federal Regulations (which is just as soporific as it sounds), know that Capstone International Center (CIC) has already burned that midnight oil for you. CIC has produced Visas 101, a two-page crash course in visa types, visa statuses, and even green cards. Learn (in language that won’t cure your insomnia) the differences between immigrant and non-immigrant visas, what kinds of employment are allowed for visa holders, and why a date stamped on a visa might not work quite like the sell-by date on the milk in your fridge.

With the explanations and examples provided, we can all be better prepared to correct common misconceptions — and maybe even address a few wacky hypotheticals dreamed up by students who should clearly watch less television.